On Friday, Fourth Graders in Mrs. Harlow's ELA class met with their First Grade Buddies to share their informational books about National Parks.  Every fourth grader at Memorial researched a National Park and created a book about the park using their iPad devices. Students were very proud of their work and excited to share with their first grade friends!


Spring is definitely in the air here at Memorial!  Stories of softball, baseball, soccer, etc.
are circling the classrooms and playgrounds.  Finding time to fit in dinner, a game, and homework can definitely be challenging at this time of year.  It just may require being flexible about where the reading gets done!
What is a parent to do when they hear, "I don't have time to read tonight!"   My recommendation is to get creative!  Encourage your young readers to think of times and places they can get the reading done...

There is a lot of research that correlates time spent reading to a child's success in school.  The Greer Genius chart below compares a child who reads just 20 minutes per night to one who only reads 4 minutes or not at all.  The difference in the amount of words read is staggering!  Challenge your child to be the one who gets more experience reading! 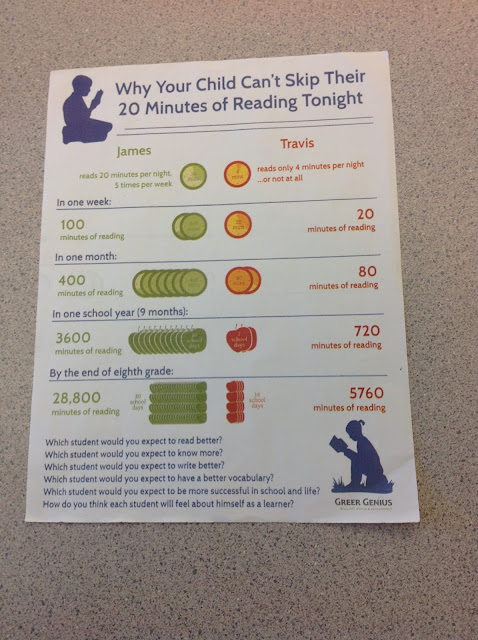 Posted by Unknown at 5:15 AM No comments:

The Literacy Lowdown- What is Fluency?

When students are just beginning to read, their reading typically sounds choppy and labored as they are still focused on decoding unfamiliar words.  As students begin to grow as readers, it's important that their reading becomes fluent.  A fluent reader is able to read at a natural rate with accuracy, and expression.  When fluent readers read, it is as if they are speaking in their natural voice.

Why is fluency important?

Reading with fluency allows kids to be able to focus their attention on understanding the meaning of text.  Readers who are not fluent have to focus on decoding words, and so it is more challenging for these students to comprehend the story or passage.  Developing fluency in readers allows them to read with ease.

How do kids become fluent readers?

The largest component of most fluency instruction is repeated readings of the same text.   At home, you can help your child become a fluent reader by encouraging them to read aloud their favorite books and poems multiple times.  Another helpful tip for families is to read a book or poem to your child first, and then have your child read the same text along with you.  To increase reading rate, I would also suggest timing each time a child re-reads a paragraph or poem.  Encourage the reader by pointing out how they are able to read faster as they continue to practice.

How do we assess fluency at Memorial School?

At Memorial and throughout the district we utilize a couple of tools for monitoring a reader's fluency.  The DiBELS Oral Reading Fluency Assessment (DORF) is used in 1st-5th grades to measure student rate and accuracy when reading.  Accuracy is the percentage of total words read correctly.  After they are finished reading aloud on the DORF assessment, kids are asked to tell as much as they can about the passage that they read.

Another assessment used for oral reading fluency at Memorial is the Developmental Reading Assessment 2 (DRA2) .  For this test, students are asked to read a book and then demonstrate their understanding of the text.  Depending on the level of the assessment, the Oral Reading Fluency score is composed of different subscores such as phrasing, accuracy, rate, and expression.

In addition to these formal assessments, each child's fluency is informally measured by their teacher during guided reading lessons.  Because guided reading is taught to small groups of students, teachers have the opportunity to listen to each child's oral reading as they get to know them as readers.

Posted by Anonymous at 10:17 AM No comments:

The Literacy Lowdown- What is Phonics?

In a nutshell, phonics is the part of literacy instruction that teaches kids the relationship between letters and sounds.  Students apply this knowledge when they decode and read words.  Early in their elementary career, readers also begin learning to distinguish between different syllable types.  This knowledge comes in handy when learning to read longer words with many syllables.

What are nonsense words?  What is their role in phonics instruction?

Nonsense or make-believe words are often incorporated into phonics instruction.  A nonsense word is a word that has no meaning. For example, het, blate, grop, and lim are all nonsense words.  You cannot find these words in a dictionary.

You may be asking yourself, Why do teachers ask kids to read this nonsense? (pun intended)  Well, there are a couple of reasons why we embed nonsense words into our phonics instruction.  When students are asked to read make-believe words they must rely only on their phonics knowledge to read.  With real words, students sometimes recognize the word by sight.  A teacher may present nonsense words to students to ensure that they are relying only on their understanding of a specific phonics skill(s) to read the word.

Another reason that teachers ask children to read nonsense words is because they are often found within longer, multi-syllabic words.  For example, the nonsense words rel, mas, and nic can be found the following real words: relish, mascot, and picnic.  When children can read nonsense words quickly and with ease, they are likely to solve "tricky" words that they encounter while reading in the same manner.

Posted by Anonymous at 12:31 PM No comments:

After reading my recent post about phonological awareness, you may have asked yourself, How do we as parents and teachers know that students have mastered all of these skills? Teachers at Memorial combine their daily interactions with students and the
results from three universal/benchmark assessments to determine student progress and next steps for instruction in phonological  awareness.  These assessments are: DIBLES First Sound Fluency (FSF), DIBELS Phoneme Segmentation Fluency (PSF), and the Burlington Phonological Awareness Screener- keep reading for more information about each of these assessments!

All kindergarten students at Memorial are administered this assessment at the beginning and middle of the school year.   It is given to each child individually.  During the test, children are a asked to give the first sound in spoken words.  At the beginning of the year, we expect kids to identify 20 first sounds in one minute, and at the middle of the year the expectation is 30.

The Burlington Phonological Awareness Screener is a formal assessment that was created by teachers in our district.   It is composed of ten sub-tests, and assesses student's ability to apply a range of phonological awareness skills.  Specifically, it measures a child's understanding of rhyme awareness, syllable awareness, and phonemic awareness.  The test is administered to all kindergarten and first grade students in Burlington.

Posted by Anonymous at 12:03 PM No comments:


The highlight of our morning was a special visit with a Burlington High Senior, Caileigh H.  She did a wonderful job reading a couple of our Dr. Seuss favorites.  A huge thank you to Mrs. Bannon and Mr. Peterson for organizing this event!

Continue the celebration  tonight and the rest of the month with fun titles from this  Complete List of Dr. Seuss Books.

For online fun and games check out Seussville.

Posted by Anonymous at 2:02 PM No comments:

The Literacy Lowdown: What is Phonological Awareness?

We expect our earliest students to recognize and produce rhyme with ease.  Kids have fun learning to rhyme through a variety of creative activities that involve pictures, puppets, songs, and more!  It's great to encourage children to play with creating new nonsense words that rhyme.  For example, "What rhymes with purple...how about murple?"

Before learning to read, kids should first develop the ability to determine the number of words in a sentence.  Students who have a keen grasp of word awareness can also distinguish between lengths of words.  For example, "Is this a long word or a short word?  How do you know?" They demonstrate an understanding of compound words by segmenting, blending, and isolating the individual words.

Many children learn how to segment the syllables in a word by clapping for each syllable they hear.  Syllable awareness also involves blending individual syllables to say a whole word.  It's also important for kids to learn how to manipulate or "play" with the syllables in a word by isolating and deleting a syllable.  For example, "Say kindergarten.  Now say kindergarten without the ten." The student's response should be, "kinder."

Segmenting Phonemes: In a nutshell, segmenting phonemes is the exact opposite of blending phonemes.  When students segment the sounds in a word, they break apart the word by its individual phonemes.  For instance, if an adult or peer says the word, bed, the student would segment the phonemes by responding, /b/ /e/ /d/.

Isolating Phonemes: In Kindergarten, students learn how to isolate each sound that they hear in words with at least three sounds.  When given a whole word, kindergarteners should be able to produce the sound they hear only at the beginning, middle, or end of a word.  For example, a teacher might ask a child, "What is the sound that you hear in the middle of the word, back?"  The student should respond with only the middle sound, /a/.  It should be noted that isolating and manipulating middle sounds is more challenging than working with beginning and final sounds.

Deleting Phonemes: Second graders should be able to delete one of the sounds that they hear in words with at up to five or six total phonemes.  A student might be prompted to delete phonemes in this way, "Say splice.  Now say splice without the /p/."  The student should respond, "slice".  In first grade, we expect students to delete the phonemes in words with at least three to five sounds.

Substituting Phonemes:  In first grade, students learn how to change words by replacing sounds with other phonemes.  For example, teachers may ask their students, "Say hit.  Now change the /i/ to /a/."  The student should respond with the new word, "hat".

Posted by Anonymous at 2:43 PM No comments:

Margie Johnson
A book lover at heart, I have been teaching reading at Memorial School for many years! I work with students in second, third and fifth grades. If you would like more information about a blog or have any other questions about reading, I welcome your calls/emails. I can be reached at 781-270-1721 x-5344 or johnson@bpsk12.org.
Christine Myint
Born and raised in Michigan, I came to Memorial School after teaching in Chicago Public Schools for five years. I am a reading teacher for Kindergarten, First, and Fourth Grade students. For more information about a blog post or for any reading questions please contact me at: cmyint@bpsk12.org or (781)270-1721 ext. 4610.
Be sure to put your email into the box below to receive email updates when we post to the blog. Thanks!